So last Friday was a day a lot of people, and investors, had been waiting for.  The highly anticipated public offering (IPO) of Facebook, Inc. (ticker symbol FB).  Shares opened at $38 and were quickly up to $42.  Then Monday, the first full day of trading after the IPO, the stock dipped down 13% at one point, finally settling just over 11% down at $34.01.  As of today, 5/23, the stock is down about $6 from its opening price.  Now, this isn’t surprising after an IPO.  Not every stock shoots up like Google (GOOG) and keeps on going up.   Even though some stocks can be hot when they IPO, I wasn’t interested in getting in on Facebook, even though their shares were going to be accessible to individual investors like myself.  Typically its really hard for an individual investor to get in on an IPO.

I’m not convinced Facebook has a solid business plan right now.  Their only legitimate way of generating revenue right now are ads that they display on the right hand side of their pages.  Just recently, news came out that 44% of Facebook users polled said they would never click on a Facebook ad.  And this was after GM said they were pulling their $10 million budget they had earmarked for Facebook ads because they don’t feel they are effective (or don’t work, depending on which article you read).  Now none of this means that social marketing or marketing on Facebook isn’t effective.  GM will still invest $30 million in social network marketing, so I’m not saying that social network marketing is a fools errand.

What this data does suggest though, is that Facebook might not be able to generate the revenue investors initially thought, especially as new user registrations slow.  That will mean they’ll have to find another way to generate revenue.  Might we see “sponsored” ads in our news feeds like you see on Twitter?  Perhaps, but people could ignore those too.  Also, will you be able to “ignore” ads like you can ignore posts in your feed?

Personally I think ads might have been the wrong thing to depend on for Facebook.  What they should have done was charge companies like Zynga, who create apps and games on the Facebook platform, to use the Facebook API.  Right now Zynga is basically getting a free ride on the back of Facebook.  Further, once Zynga started selling virtual items to its users, that should have been a no brainer for Facebook to hit Zynga up for some sort of licensing fee.  Don’t tell me Zynga wouldn’t pay either.  Its the same model Apple uses in their App Store when iOS users buy an app.  The same model would work for Facebook.

The bottom line is Facebook will have to find new sources for revenue besides advertising.  They can try and sell their users personal information, but why alienate your user base?  They’re already recovering from the boondoggle their IPO has become as covered in these articles here and here.  Facebook will surely recover and probably be a decent investment long term, but only once they prove that they can regularly meet and exceed investor expectations.  Only time will tell.

Update:  Market valuation guru Aswath Damodaran gives Facebook a valuation of $29 a share.  That’s a far cry from its IPO price.  So it would seem that waiting is indeed the right tactic when it comes to investing in Facebook.  Lets see what they can do as a publicly traded, and scrutinized, company.

I was going to Twitter tonight and forgot to type in the second ‘t’ (twiter instead of twitter). Took me to a site that looks almost like Twitter, but with a survey popup instead: 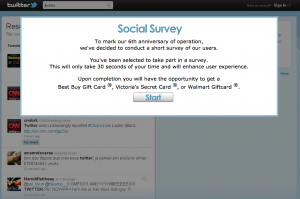 It looks like its a survey site looking to gain access to email addresses. They made the site look legit enough to make a lot of people probably think its really Twitter interested in a user’s input, but it’s not. After you answer 3 simple questions, you’re asked what you’d like to be entered to win (iPad 2, Victoria’s Secret Gift Card, or $1,000 Gift Card). Obviously you’re not going to win anything, but the site owner will certainly take your email address and sell it to make a tidy profit. Users beware.