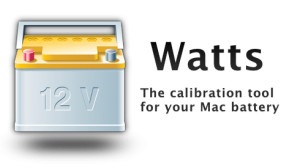 My good buddy Kyle pointed me in the direction of a great little app for OS X to manage your MacBook Pro battery. Its from Binary Tricks and its called Watts. This little app, which only costs $6.95 by the way, allows you to calibrate your battery through 5 easy steps. Various people out there on the intertubes suggest you calibrate your battery once a month to maximize its life. I’m on my second 17″ MacBook Pro battery after the first one suffered the infamous “Swollen Battery” problem almost 2 years ago. That said, I want to get as much out of this one before ponying up another $130 for a new battery. I’ve been using Watts now for about a month and so far I love it and highly recommend buying it.

Speaking of new batteries, Other World Computing offers new 17″ MacBook Pro batteries from NuPower for only $99.99. They supposedly hold a longer charge and last much longer than those sold directly by Apple. I haven’t tried one yet though. They also sell Battery Charger/Conditioner devices for them. I’m not sure I’d pony up the cash for one of those though.