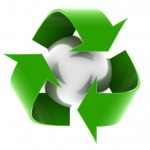 I had these 2 old CRT televisions sitting in my condo for the last 4 years. One my wife and I never watched. The other we watched only when we were being lazy on a Sunday morning or one of us was sick in bed. We decided to try not having a TV in the bedroom, so I went to Craigslist to sell them both. Over 2 months, I probably posted my ads 4-5 times lowering the price of the televisions each time. I think by the last try, I was asking $25 for a 27″ and $15 for a 19″. Still no takers.

I figure the cost of paying to recycle these suckers (they are super heavy!) would have been somewhere between $50 and $100. There was no way I was just going to find a random dumpster and toss them. That’s in no way environmentally responsible. So, I stuck them out at the street in front of my workplace around 12:45 and put a sign on them that said “FREE (works just fine)”. I figured they might be gone by the end of the day if I was lucky. For giggles, I went out around an hour later and they were both gone! YES! Sending stuff off to a new home for free gave me the ability to do the right thing without having to pay someone to do it. Now I have free space in my condo and the good feeling of having done what I thought was the right thing.

So, if you have electronics in your house that you can’t sell or can’t give away online, put it out in front of a busy street near where you live or work (or even at a friend’s place) and put a FREE sign on them. Bet you your electronics find a happy new home!