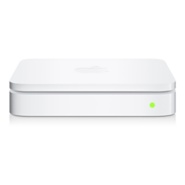 I’ve been going through wireless agony lately. First, my trusty Linksys WRT54G wireless router bought the farm. It had lasted quite a while, probably at least 5 years. I think it should have lasted longer, but my fooling around with its firmware probably didn’t help it out much. So when it died, I went out to buy a new one.

Against my better judgment, I went with a Netgear instead of another Linksys. The price and features were a little better, so I said what the heck. Big mistake. While it works great if you’re connected via an ethernet cable (it’d be really bad if it didn’t), the wireless is just crap. Even with my laptop no more than 5 feet away, the wireless signal, though strong, doesn’t give a reliable internet connection. Yeah, its wireless and it won’t be as fast as loading when connected directly, but waiting a minute or so for a page to load is just crazy. So I’d had it. Time to return it. But what to get?

I was in the Apple Store getting my new Mag Safe adapter (and OS X Snow Leopard) and I decided to give their Airport Extreme Base Station a go. It was sort of a cross between an impulse purchase and the desire to get reliable wireless back again. Boy am I glad I bought it. Install was a snap with their Airport Utility. The internet is served up like it was when I was plugged in to my old router and the POS Netgear I tried out. I’ve read some reviews where people don’t like this thing, but I don’t know why. Maybe they just don’t know how to use it or wanted something different. This puppy is it for me. I’ll never go back!